I’m posting this from a Delta flight from Columbus, Ohio on my way back home to Seattle. This trip home would mark the last journey in the month of October, capping an epic 40,000 mile trek around the globe. But October wouldn’t go down without a fight.

About 24 hours ago, I was in NY, being interviewed on Anderson Cooper’s talk show as the deadly Hurricane Sandy came barreling in to the East Coast. It was an eerie feeling on Sunday night when I came to town. The streets were deserted, the usual assault on the senses replaced with a deadness unfitting of Manhattan. As the night wore on, and as the city started shutting down its trains and buses, my interviewers were canceling one by one.

I had a hard time sleeping that Sunday night. Sandy was forecasted to make landfall on Monday, a day sooner than we had expected. I had dinner with my friend Tom and we talked about Hurricane Irene and how overblown most predictions of doom and destruction were. After 3 hours of sleep, I woke up at 1 AM and started scanning the news. Flights were being cancelled, people were fleeing the coasts. Mayhem was ensuing and it looked very real. 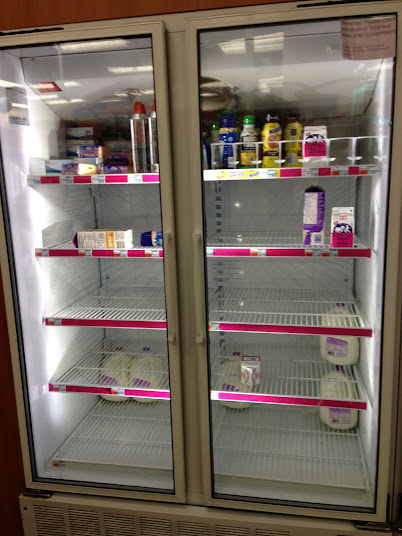 I was in NY to do one day’s round of press for LOLwork, the reality TV show based on I Can Has Cheezburger?. Between my wonderful wife Emily, our PR consultant, Bravo TV’s PR staff, Anderson Cooper’s producers, there were 6 people whose job was to coordinate where I showed up for what and when. But while I slept, the email exchanges between the team were taking on an air on serious concern. I was due back in Seattle on Tuesday morning for more interviews and talks. The whole week was jam packed and Hurricane Sandy was about to scramble all of it.

Monday at 8 AM, I was in the green room at Anderson Live, one of the few interviews that didn’t cancel, and the council of travel coordinators were trying to find a way to get me back home after the show.

Plan A was Newark. Closed.

Plan B, JFK. As soon as we booked it, it was closed. So was LaGuardia.

As I finished taping my segment, Allentown called it quits.

At this point, most people have given up and stayed in NY. But I just wanted to go home. I didn’t want to blow up my entire week because of some storm. I was done traveling for now.

It was time for Plan E.

“I’ll drive to Pittsburgh today,” I told Kristen, the PR coordinator from Bravo who was assigned to guide me that day. Driving out on a one-way rental from Manhattan, Pittsburgh was 7 hours away without a giant fucking hurricane throwing debris on the roads. A 5:40 AM flight on Tuesday morning would take me into Seattle for a full-day’s work. It’ll be hard, but nothing I haven’t done before. Kristen’s face looked as if I was shouting Klingon at her.

A game of telephone ensued where I had to assure everyone at Bravo that it would be perfectly safe for me to drive my ass 400 miles away to Pittsburgh just to fly home on time. I neglected to tell them that I had only slept for 3 hours.

I also regretted not packing my GPS. But I figured, how bad could iOS 6 Maps be? And I had a back up Android phone anyway. 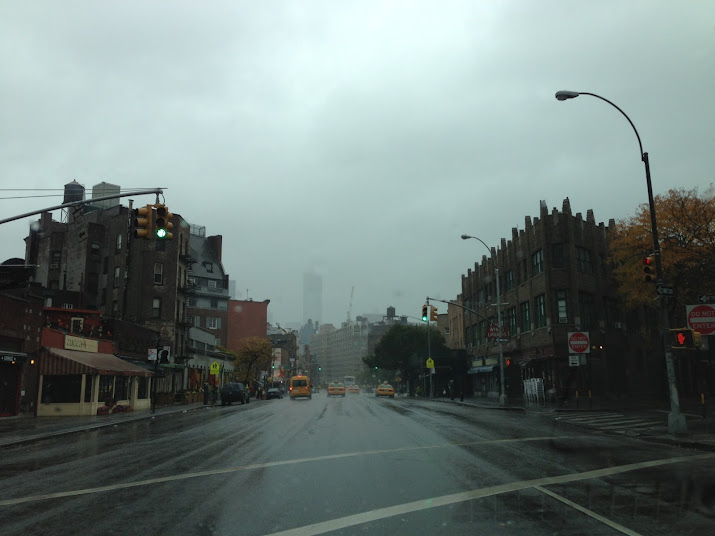 I made it to the Holland Tunnel at around noon. Driving through Manhattan felt like driving through Columbus, Ohio on a Sunday morning. I was in Jersey in no time. 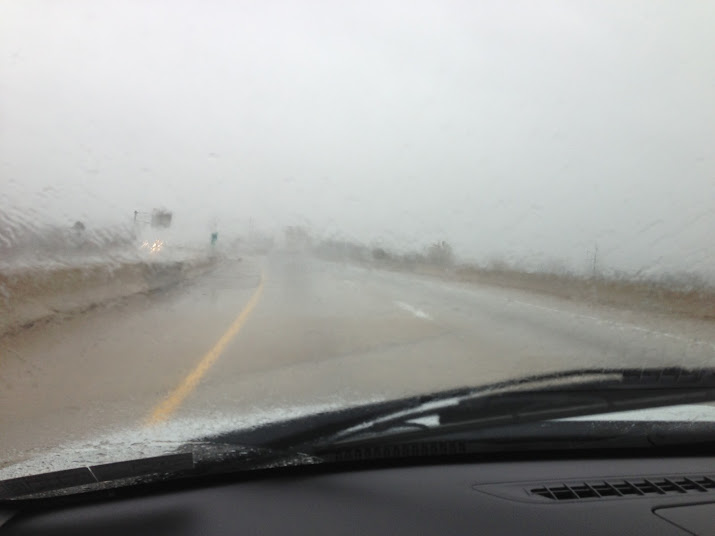 Traffic cones. Road signs. Branches. Fans. Underwear. Windows. Tires. Dead deer parts. I’m pretty sure there was a kitchen sink in there somewhere. Between the dancing tractor trailers, 100-yard visibility and gusting winds, my hands were hurting from gripping the wheel too tight. I just wanted to go home. Pittsburgh was at least 6 more hours away.

Fuck it. I was going to own this. With my right hand checking the Doppler radar and my left hand navigating the rental car, I realized that this was going to be a battle for the ages. A giant red and stormy cell of rain was following me westward. Apparently, I shouldn’t try to be a meteorologist.

After a couple of hours, I got used to the white-knuckle conditions and even managed to squeeze in a couple of conference calls while driving. A little over a year ago, I basically closed the purchase of Know Your Meme driving through a hail storm in the middle of Indiana at night. This couldn’t be harder than that. Right?

It was hard to fight the fatigue, rain and wind, but at 7 PM, I managed to pull into the Pittsburgh airport without a scratch and went to my hotel room. The winds were howling and shaking the building, but 7 hours of hardship wasn’t so bad. I looked up the Doppler radar and saw this Eye of Sauron looking motherfucker. Wow. 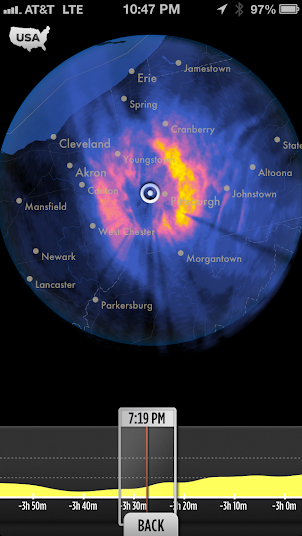 After settling in for the night, I tried to check into my flight.

Plan E just got blown away.

At some point, you have to call it quits. I drove 408 miles from Manhattan across New Jersey and most of Pennsylvania only to find myself back at square one. I had even survived iOS’s suicidal navigation directions. I was a survivor.

And I was pissed. I understand that a super-sized hurricane that’s engulfing all of the Eastern Seaboard is an act of God. If I cancelled all my meetings for the week and called in stranded, everyone would understand.

I was moving on to Plan F. I called up the council of coordinators again. My next choices were Cleveland, Columbus, or Detroit. One way or another, I will be in the office Tuesday morning. Period. We figured out a plan and I took a 2 hour nap, letting them book the logistics.

Just 5 hours after checking in, at 12:15 AM Tuesday, I walked out of my hotel and to the Hertz counter, only to find that they had gone home early, abandoning my reservation and stranding me at the airport. Plan F was off to a fucked up start.

I called up my wife and I wondered if this was meant to be. Was I just supposed to be stranded? Was this fate? Was this the invisible hand of God? Was Hurricane Sandy trying to tell me something?

But there was one rental car company open. There was always a way. Always. But I had to ask myself, was this a good idea? Was it worth it?

Most sane people would say no. Just cancel the meetings and stay. I could hang out with one of our employees who lived in Pittsburgh. It looks like a nice town.

I left Pittsburgh International at 1:45 AM in a VW Jetta and headed 175 miles West towards Columbus, Ohio.

I passed through the clump of rain clouds that had followed me from New Jersey. Then winds slowed, and the rain got lighter. But just to make life more interesting, as I got within an hour of Columbus at 3 AM, the rain turned to snow. At that moment I wished I had slept more than 5 hours in the last 2 days. I wished I had brought something heavier than a sport coat. I wished I was home. Hurricane Sandy was throwing every trick in the book at me.

I pulled into the Columbus airport at 4 AM. Grabbed myself a version of the road warrior’s Thanksgiving and let my body relax. 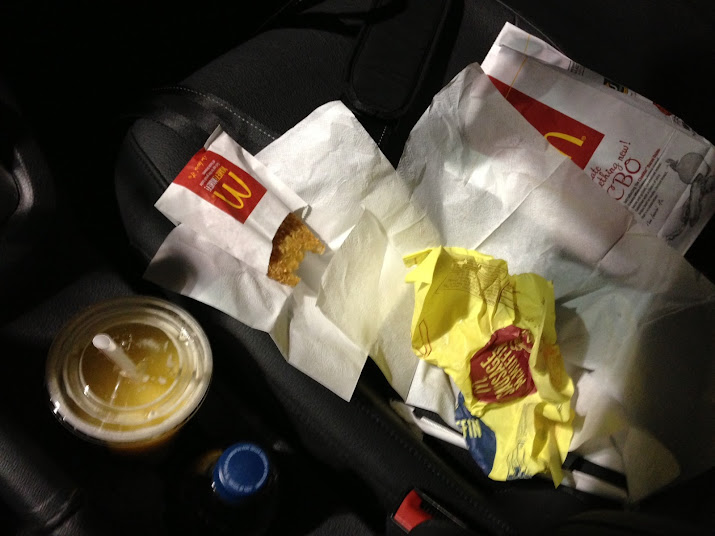 I don’t know if there is a lesson in this story. I don’t even know why I tried so damn hard. I’m so tired that I can even barely type this story and I’m sure it’s full of typos. But I wanted to remember this, perhaps to regret it. Maybe it’s a lesson about the stubbornness of entrepreneurs. Maybe it’s about the determination of travelers who want to go home. Maybe it’s that if you drive 408 miles, another 175 doesn’t seem so far. Maybe I’m just loopy from lack of sleep.

I’m saddened to hear about those who lost their lives and homes to Hurricane Sandy. But right now, as I am flying home, I can tell you that I feel like I fought Hurricane Sandy. And won – or got incredibly lucky. And every once in a while, you just need to know you can win at something, or appreciate that you’re just lucky.

Being on the plane while it is being loaded is not the same as being on the way. As I posted this, Sandy brought in one final surprise in the form of a blizzard. So we had to deice the place twice, causing almost an hour delay. But I did make my connection, if just barely.

Lesson learned: you ain’t home until you are home.

And Sandy, fuck you and the tropical depression you rode in on.

Brad Feld is a managing director at the Foundry Group, one of the venture firms that invested in Cheezburger. If you are a person in the startup world, you already know him as a venture capital rock star thanks to his track record and... Continue →